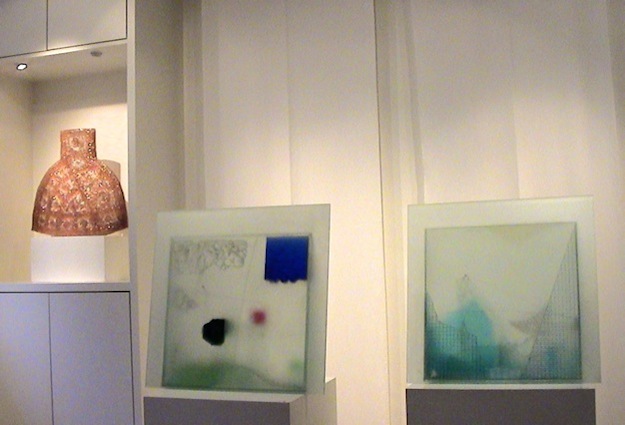 Duration of the exhibition: 3 November – 20 December 2002 – During the 14 years since its foundation of Glasgalerie Hittfeld glass loving visitors could contemplate the glass art of many outstanding artists. Whereas most of the Czech artists proceed the glass sculptorally, Jaroslav Matous is an exception with his painted way to express himself.

As before he still finds his inspiration in the open country, however, his way of expression has changed during the last years. He diverged from his pierced and sawed up vessels, which he subse- quently tied together with fine wires, thus representing the symbol for the fragility of nature. Instead he dedicated himself to the poetic side of nature. His objects are now being made out of melted glass, which are then being conntected with wires, or they consist out of sumped and joined glass plates.

The etched, mat glass with its gleaming transparency allows him to suggest the object’s mysterious inner life. His poetic view to contemplate nature determines his objects individually and originally, thereby offering philosophicallly the vulnerable connections of our environment.