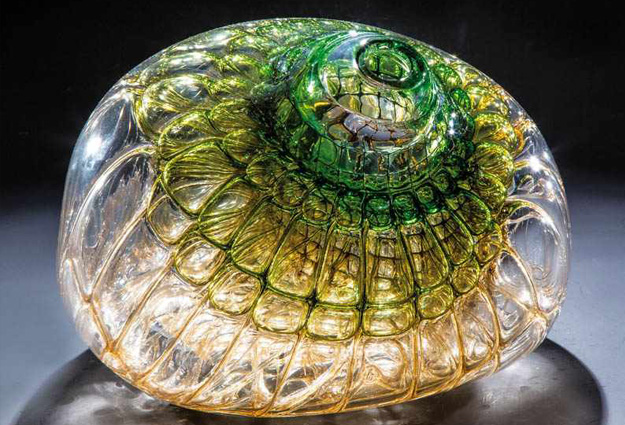 Duration of the exhibition: February – April 1997 – Since the foundation of her glass gallery, Eliska Stölting solely exhibited objects of Czech glass artists. However, as this relatively young art is still not very well known to the public, she has extended her concept a few years ago by presenting once a year an exhibition of Czech glass art together with the glass
art from another country.

In the past works of Swedish, American, Slovakian and French glass artists were shown in confrontation to the works of Czech glass artists. This time 20 outstanding Czech and German glass artists will jointly present their glass sculptures in Glasgalerie Hittfeld.

The gallerist, Eliska Stölting, born in the Czech Republik, invited internationally recognized glass artists from the Czech and German glassscene, who give an overall view of the contemporary glass art of both countries. “I hope”, stated the gallerist, “that I will be able to give the public an insight into the variety of the respective country’s glass art by these exhibitions.”

This event is attended among others by a representative of the Czech Embassy in Bonn, the Czech honorary consul in Hamburg, by representatives of the Hamburg Cultural Office, the district government Lüneburg, the German-Czech Society as well as by artists from both countries and representatives from various museums.

Originally this artist was a classical sculptor, who finished his studies at the Academy for Applied Arts in Prague under Prof. Wagner. In the subsequent years he worked exclusively with stone and wood until 1966.

In 1966 the Czech glass artists Prof. S. Libensky and Jaroslava Brychtova began with the realization of the three monumental glass sculptures for the World Fair EXPO 67 in Montreal. They needed an experienced creator for the reinforcement of their realization team in the glassworks of Zelezny Brod. There was absolutely no doubt about Fisars capability in the field of the sculptural phases, as for example the preparation of the sculptural forms, moulding etc. This is why he joined the glassworks and worked there until 1971 as a free artist.

Although Jan Fisar mainly worked for the architecture from 1966 until 1980, he simultaneously created several interesting objects. Since 1980 he has exclusively dedicated himself to the creation of studio glass. “At the time of the socialism, there were only two organizations which had the monopoly to present the objects of an artist abroad. Therefore the artist didn’t have the slightest idea where his objects could be found or who had acquired them”, stated Jan Fisar in the video film “Another Bohemian Glass”.

This is also the explanation why the majority of the plastics exhibited in Glasgalerie Hittfeld date from the period after the political change. In spite of this, objects of Jan Fisars various creative periods are represented.

For example from his initial years 1966 to 1968 several objects of melted glass are exhibited which in no case can be described as “old”. The great variety of his interests becomes visible in his “cycles”. Principally this work is divided into two wide and totally different fields:

The sculptures, i.e. figured objects created out of slumped glass and their variations, and the optical works, werheby the artist concentrates on the interior of the object. This also includes his “baroque glass sculptures” as well as the presently finished theme of “shells” and the unique “mythical creatures”, which he created from 1987 to 1991 and whereby he combined glass with bronze. The always new variations of the so-called “stones”, which for years have shown a constant development, are part of the second field, together with the already abandoned theme of the “prisms”.

Due to the technology of the slumped, optical glass, a technique which the artist developed by himself, he has created objects being called “movement of the material” in the last few years, which establish the connection between these two fields. As hardly anyone else, Jan Fisar masters the technical refinements which he uses for the realization of his glass plastics. These refinements enable him to develop his sculptoral feeling and to fully concentrate on his message.

In a manifold way, his objects allow a look at his life and his experiences. His artistic conversion – even that of his negative experiences – ends, however, positively. Today works of the sixtythree year old artist can be seen in international musuems as well as in numerous private collections all over the world.

This unique exhibition – Jan Fisar – 30 years working with glass – which Eliska Stölting presents in her glass gallery, not only offers an amazing summary of the creations made by this artist, but it also fully appreciates him through his ojects as an “individual”.